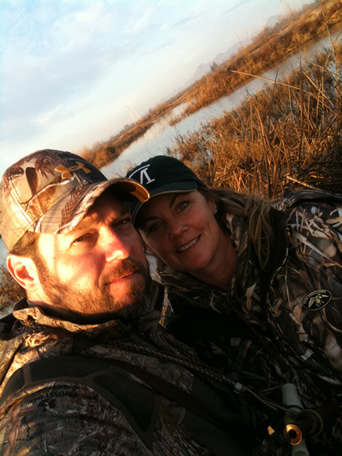 Hello, My name is Jeff Torrey. My Story starts with a Chocolate Labrador named Rocky. A long time friend of mine purchased rocky and trained him as a gundog. I was amazed by the Labradors eagerness to learn.

I started training Retrievers in 1992. My wife, Suzie, purchased a Labrador puppy for me as a gift. She hoped training this puppy would give me an escape from my stressful and sometimes dangerous career. Little did she know, this puppy would change our lives.

I was a Deputy Sheriff for Los Angeles County and worked the graveyard shift. These hours are very hard on the body, but great for dog training. I bought every instructional book I could find, but quickly realized that training is not always a step-by-step process.

Early on I was lucky enough to be introduced to Bob and Jewel Easter. I learned a lot in the time I spent with them. It was Jewel who told me about the importance of Basics.

Over the next several years, we ran hunt tests to learn the ropes. We ran Master Hunt Tests all over the country and had a great time. During my travels I was lucky enough to hook up with Jan Burkholder. This is where I learned the Basic program. Jan had worked for many of the better pros in the business, before she started a business of her own. (Stonewall Retrievers)

Jan later introduced me to Bill Sargenti and Delma Hazzard. Having their experience to draw on has been invaluable. Although they both came from the same training background, (Rex Carr) they both have very different styles. This is where I realized that training is as much an art form as it is a science. Every trainer relates to there dogs differently.

In June of 99, I resigned from the Los Angeles County Sheriff’s Department to pursue a full time career in Retriever training. Like a Doctor or a Lawyer, I wanted to specialize in a particular aspect of the business. This would keep me from spreading myself too thin and allow me to learn the ins and outs of my craft. I have always had a love for the young dog work and decided to specialize in that.


Our first 5 years in Business resulted in 10 FC AFC titles, 1 National finalist, Several National qualifiers both Canadian and American, Many all age placements, lots of derby/qualifying placements and many passing scores and titles from AKC Hunt Tests. We have been so blessed with great dog owners, handlers and all age pros that have helped progress the dogs we've enjoyed so much.

Since then we have transitioned the business out of training competition dogs and now develop hunting companions for waterfowl hunters. The Hunting pictures of graduates and reports of their amazing retrieves are every bit as rewarding as a competition ribbon     to us.  Good luck to you and your hunting dog this season.

Past Trial Graduates from Buckshot Retrievers: